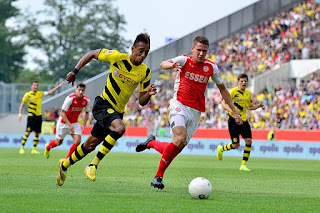 The Gunners identified the Gabon international as a top target once it became clear that Alexis Sanchez would be heading out of Emirates Stadium.

He has departed for Manchester United, with Henrikh Mkhitaryan moving in the opposite direction, but no progress has been made in the pursuit of Aubameyang.

Wenger has now confirmed that no agreement is in the pipeline, although the Frenchman claims there could be movement before the January deadline passes, telling reporters on Friday: “I cannot tell you more. We have nothing to announce. At the moment, we stay where we are.