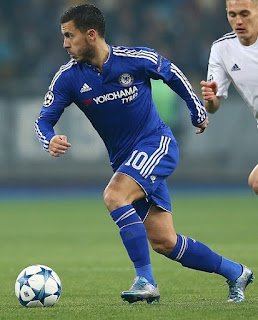 Antonio Conte's men had been held to five consecutive draws – three games ending goalless – in all competitions, needing a penalty shootout to get past Norwich City in the FA Cup on Wednesday.

Progress to the fourth round came at a price, with forwards Alvaro Morata and Pedro receiving red cards, but Hazard and Willian made light of their absence with goals inside the first six minutes – the Brazilian's eighth of the campaign certainly one to trouble the end-of-season lists.

To their credit, Brighton did not buckle. Ezequiel Schelotto was unfortunate to have penalty claims rejected and Davy Propper hit the post after half-time.

Willian came similarly close to his second before turning provider on his 50th consecutive Premier League appearance for Hazard.

Victor Moses added gloss to the scoreline in the 89th minute as the reigning champions moved up to third in the table.