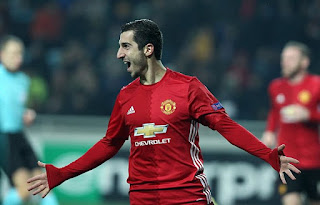 Henrikh Mkhitaryan “had a problem” with Manchester United manager Jose Mourinho and is better off at Arsenal, says Armenia coach Artur Petrosyan.

The 29-year-old has traded Old Trafford for Emirates Stadium after being used in a swap deal which took Alexis Sanchez in the opposite direction.

"Yes, he [Arsene Wenger] likes them to play better football. I think Wenger is better for Henrikh," Petrosyan said.

“We are very happy with this transfer from Manchester United. His style of play will be better suited at Arsenal.

“I only spoke with Miki and I cannot tell you about my talks with Miki because it was between us, but I told you about my impression that I was not happy with Mourinho.

Petrosyan added on a testing period for Mkhitaryan at Old Trafford which saw him win three trophies but endure regular spells out of the team: “I think the [Manchester United] fans liked him. I think that means he did something for the club.

“I am not happy with Mourinho’s decision not to play him, but it is his club, his team — he knows what he wants. It is good he has left.”