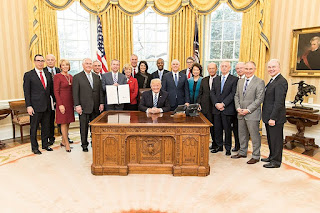 Trump sought to mend relations Friday with a key African leader in the aftermath of his controversial comments about African nations, praising the U.S. partnership with Rwanda along the sidelines of the annual World Economic Forum. This was after Trump drew widespread condemnation for allegedly referring to African nations as “shithole countries”. The president has denied using that language. Others present insist he did.

Trump described having “tremendous discussions” with Kagame, who is beginning a one-year term as head of the African Union, a 55-member continental body that criticized the U.S. president’s remarks. Neither Trump nor Kagame made any mention of the row during brief comments to reporters.

“It really truly is a great honour,” Trump told Kagame, noting his role with the African Union. “So please give my regards, I know you’re going to your first meeting very shortly. Please give my warmest regards. But it’s an honour to have you as a friend.” Kagame said they had “good discussions” on economic and trade issues. He said the African Union is “looking forward to working with the United States.”