Joel Embiid Almost Gets Into a Fight During a Tailgate Party 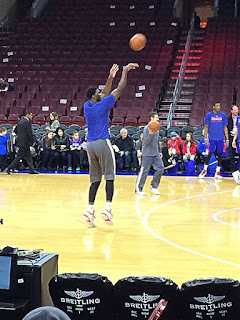 If there’s a lesson to be learned by the Philadelphia public after this video has surfaced, it’s to not get in the way of Joel Embiid while drunk.

After playing for the Philadelphia 76ers for a little over a full season now, Embiid has taken on the task of surrounding himself with the sports-crazed fans of other Philly sports teams, including the NFL’s Philadelphia Eagles, who recently defeated the Atlanta Falcons in their Divisional round of the NFL playoffs.

Philadelphia sports fans are known for being some of the most hardcore fans of their teams in the entire USA, so it comes as no surprise that the tailgate party Embiid attended to watch the matchup between the Eagles and Falcons resulted in some sort of confrontation. especially when you consider alcohol was involved.

One fan, spotting Embiid’s 7’0 head above everyone else’s in the sea of fans, decided to throw a football in his direction. A drunk fan — being drunk — decided it’d be a good idea to physically push Embiid out of the way and catch the ball himself. Long story short, Embiid wasn’t happy being pushed around by someone a whole foot shorter than him almost and retaliated by pushing the drunk fan to the ground with as little effort as possible.