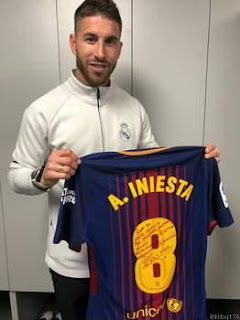 Iniesta captained Barcelona for the last time against Real Madrid in Sunday's contentious clash, the sides drawing 2-2 after Sergi Roberto was sent off late in the first half for hitting Marcelo.

And while both teams had reasons for frustration at full-time, with a contentious call for penalty for the Madrid side, the skipper Ramos still found time to Applause opposite number Iniesta, an international team-mate with Spain.

"Beyond what happened on the pitch, last night's match will be remembered as Iniesta's Clasico," Ramos posted on Twitter on Monday, alongside a picture of him holding the midfielder's shirt.