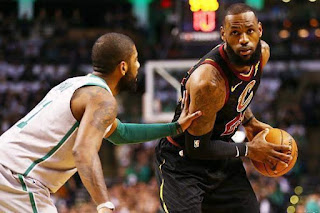 LeBron James sent Toronto into summer vacation for the third straight season as the Cleveland Cavaliers completed a clean series sweep of the Raptors with a 128-93 win in Game 4 on Monday night to advance to the Eastern Conference finals.

James finished with 29 points, 11 assists and spent some of the final 7:38 dancing near the bench during Cleveland’s 10th straight playoff win over Toronto, which changed its system, its roster and its approach but still can’t beat the game’s best player.

Kevin Love added 23 points and J.R. Smith 15 for the Cleveland, who can now rest while waiting for the Boston-Philadelphia semifinal series to end.

Jonas Valanciunas scored 18 and Kyle Lowry had 10 assists to lead the exasperated Raptors. Toronto’s frustration hit its peak late in the third when All-Star DeMar DeRozan was ejected for a flagrant foul.

Cleveland will be appearing in its fourth straight conference final despite a turbulent regular season and a bumpy start to the playoffs. The Cavs needed seven games to get past Indiana before tormenting Toronto - again.