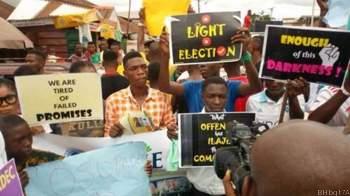 Scores of  Nigerian youth from Ilaje, the riverine, southern part of Ondo state, trooped to the streets on Sunday in protest of lack of electricity supply in their area for the past 10 years. The youth, under the umbrella of the Ilaje Advancement Forum (IAF), also lamented "the general absence of development" in the riverine, oil-producing communities.

The youths Voiced out with chants and  were armed with colourful placards with inscriptions to indicate their grievance they made  the streets non accessable shutting down businesses and as well as  economic activities in the area during the protest. Some the inscriptions on the placards read, "no electricity no election", "what offense has Ilaje Committed", "FG has failed in service delivery", "NDDC is fraud", "Ondo govt has failed us."

The youths lamented that communities in the Ilaje area of Ondo state have been in darkness for the past 10 years without government intervention. According to them, the blackout has led to the high rate of crime and insecurity; a situation which they said has further deepened underdevelopment of the area. The youths threatened that they will not allow politicians to campaign in the area if the situation remains the same.