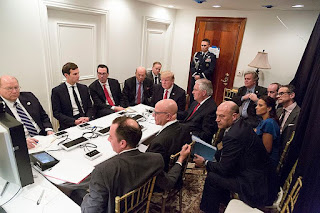 "We have made it clear all along that all of our merchandise is 100% made in the USA," Michael Glassner, the campaign's chief operating officer, said in a statement to CNN. "Any vendor who claims to have a relationship with us otherwise is lying or violating our protected trademark rights."
"This applies to all of the recent fake news about Made in China products for the 2020 campaign," he said.

Reuters reported this week that Jiahao Flag Co Ltd, a company located in eastern China, has been turning out tens of thousands of red, white and blue "Trump 2020 Keep America Great" banners since March. A company manager told Reuters that she believes the US-China trade war was spurring the larger than normal production numbers in an effort to avoid looming tariff hikes. The manager also said the buyers are located within China and abroad, and she didn't know whether they were affiliated with Trump's official campaign or the Republican Party.
CNN reported earlier this month on an NPR story that said the owner of another factory in a different Chinese province said his company is making flags for Trump's re-election campaign