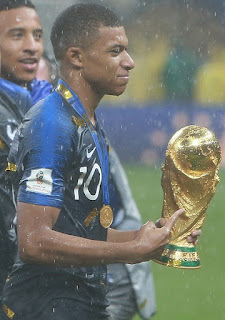 Paris Saint-Germain star Neymar was quick to congratulate Kylian Mbappe, a player he has 'special affection' for, on winning the World Cup despite grappling with the heartbreak of his nation's own exit.

Neymar and Brazil were surprisingly bundled out in the quarter-finals by Belgium, who subsequently lost in the last four to eventual champions France.

Teenage attacker Mbappe played a key part in Les Bleus' triumph in Russia, netting in their 4-2 win over Croatia in the final to finish the tournament with four goals and the FIFA Young Player award.

The 19-year-old, whom Real Madrid have denied they are targeting, returns to PSG as one of the hottest properties in world football, and Neymar insists he is delighted for his club team-mate.

"I congratulated him, of course," Neymar told reporters.

"We talked during the World Cup, always, and we tried to meet in the semi-finals but unfortunately it wasn't possible.

"But I was happy for him. He's a boy that I have special affection for, he's a boy that I try to pass on my experience [to], even at my young age, to help him become better and better."