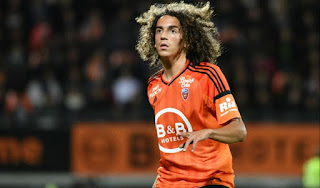 Arsenal are in talks with Lorient over the signing of France midfielder Matteo Guendouzi, as per reports.

Sources say the Gunners are closing in on the 19-year-old, who has played for France at U20 level and was linked with north London rivals Tottenham during the January transfer window.

Guendouzi came through Paris Saint-Germain's academy before switching to Lorient in 2014. He broke into the Lorient team during the 2016/17 season, making nine appearances as they were relegated from Ligue 1.

He featured 20 times last season as Lorient missed out on promotion, finishing three points outside the play-off places in seventh.

Should he move to the Emirates, Guendouzi could be joined in the Arsenal midfield by Uruguay international Lucas Torreira.