- July 05, 2018
A “psychic” cat in China that correctly predicted the outcome of six World Cup games has met an untimely end, prompting thousands to pour out their grief on Chinese social media. The orange-furred tabby, named “Baidian’er”, which means “white spot” in Chinese, was a stray that prowled around the Palace Museum in Beijing’s Forbidden City. He was offered two bowls of food, with the flags of competing World Cup teams stuck in the ground behind them. 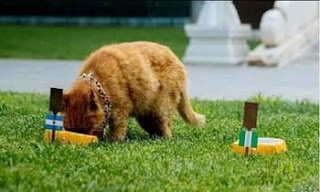 Baidian’er correctly predicted the results of six World Cup games. He achieved such fame that the Palace Museum even set up an account for him on China’s Weibo, a popular Twitter-like platform. Unfortunately, Baidian’er’s correct prediction of an Argentinian win against Nigeria turned out to be his last. The museum said the cat fell ill and finally announced its death on Monday, sparking almost 10,000 comments on Weibo.

“Every time I go to the Forbidden City, I have to go see Baidian’er, take a photo, play for a while, see him sleep on the grass in the sun,” wrote one distraught user. “Go on living a happy life in Cat Heaven, I’ll see you again.” It has not been a good week for animal prognosticators.