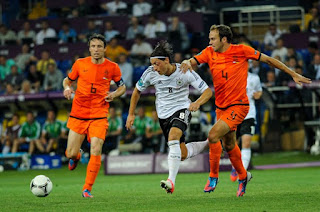 Mesut Ozil has confirmed that he is retiring from international football with immediate effect following the "treatment he received from the DFB."

The Arsenal attacker claims that the way he has been treated by the German football association makes him "no longer want to wear the German national team shirt."

The Germany midfielder made the announcement on Sunday evening citing "racism and disrespect" following his high-profile and controversial meeting with Turkish president Recep Tayyip Erdogan prior to the World Cup.

The picture with Erdogan, which was taken before this summer's World Cup, saw the Arsenal midfielder pose with the Turkish president and German teammate Ilkay Gundogan.

Both players came in for heavy criticism from fans and pundits in their homeland as a result with leading German football figures including Oliver Bierhoff and Ottmar Hitzfeld suggesting that both should not have been allowed to represent their country in Russia.

Mesut Ozil released a long statement announcing his resignation. We have transcribed his statement for you.

In the first part, he defended his meeting with PM Erdogan of Turkey as respecting his Turkish heritage.

In the second part, he accused the media of double standards demanding that he defend his meeting with Erdogan while letting Matthaus's meeting with Putin slide. He thanked Adidas, Beats and Big Shoe for standing by him but slammed other sponsors for abandoning him.

In the third part, he went after DFB, particularly its president Grindel. He accused Grindel of playing politics. While German coach Joachim Low and German President Steinmeier were sympathetic many others in Germany and the DFB were not. In a particularly stinging line, he said, "I am German when we win, but I am an immigrant when we lose."

He closed with, "Racism should never, ever be accepted.