Game of Thrones Season 8: Sophie Turner Teases 'More Death Than All the Years Before 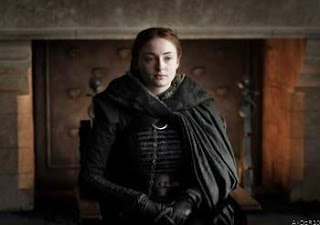 The eighth season of Game of Thrones crawls ever nearer, showrunners David Benioff and D.B. Weiss working around the clock on the upcoming batch of episodes.

While the duo have remained tight-lipped about what to expect, the actors involved have been more inclined to drop hints, including Nikolaj Coster-Waldau (Jaime Lannister) and Emilia Clarke (Daenerys).

Joining the pack comes Sophie Turner, who plays Sansa Stark on the show. Speaking to Gold Derby, the actor teased 'more death and more emotionally torturous' than ever before, which basically seems impossible considering all the heartbreak Game of Thrones has already put fans through.

“I can tell you that there’s definitely a coming together of people," she told the publication. "Everyone is coming together to fight the impending doom. There’s a lot of tension between these little groups, battling for what they think is right.

"It’s Game of Thrones, so it’s going to be bloodier and more death and more emotionally torturous than all the years before!”

The eigth season of Game of Thrones does not have a release date, Turner teased that the show will not return till 2019.