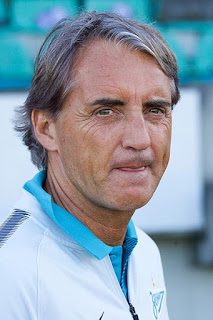 Former Manchester City manager Roberto Mancini has been named as the new manager of Italy.

The 53-year-old has agreed a two-year deal to succeed Gian Piero Ventura, who was sacked after Italy's failure to reach the World Cup.

It will be a first role in international management for Mancini, who has left Russian club Zenit St Petersburg to take up the post.

He agreed a mutual termination of his contract with the Russia club on Sunday and will now manage his country, for whom he played 36 times.

Luigi di Biagio had stepped up from the Under-21s to take interim charge of the senior national side but will now make way for Mancini.