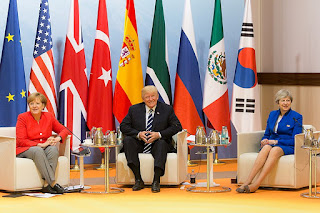 US President Donald Trump is delivering a keynote address at the close of the week-long World Economic Forum in Davos, Switzerland. The US President has been meeting business executives and other world leaders during his two-day stay in the Swiss Alps.

Here are the highlights of Donald Trump's address at World Economic Forum in Davos:

I'm here today to represent the interests of the American people and to affirm America's friendship and partnership in building a better world.

Over the past year, we have made extraordinary strides in the US
Donald Trump on economy

After years of stagnation, the United States is once again experiencing strong economic growth

Since my election, we've created 2.4 million jobs, and that number is going up very, very substantially

African-American unemployment has reached the lowest rate ever recorded in the United States, and so has unemployment among Hispanic Americans

The tax cut bill is expected to raise the average American household income by 4,000 dollars. This is the perfect time to invest in America

There has never been a better time to hire, to build, to invest and to grow in the United States. America is open for business and we are competitive once again.

We are creating an environment that attracts capital. America is the place to do business... so come to America and invest

America first does not mean America alone. When America grows, so does the world

We cannot have free and open trade if some countries exploit the system at expense of others. Unfair trade undermines us all

We are lifting self-imposed restrictions. No country should be held hostage to a single provider of energy

We are making historic investments in the American security. To make the world safer from terrorism, we are asking our friends to make their own defence stronger

We need to de-nuke the Korean peninsula. We are also working with allies to destroy jihadist organisations.

When it comes to terrorism, we will do whatever is necessary to protect our citizens

We are lifting people from dependence to independence. We know the anti-poverty programme is a very simple and a very beautiful pay cheque.
…