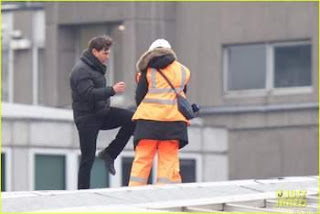 The 55-year-old actor was spotted filming the newest Mission Impossible high in the sky on top of Blackfriars Station on Sunday (January 14) in London, England. Tom‘s filming actually led to some traffic jams on the streets below in London. Still, he thrilled the fans waiting down below with a smile and a wave!

M:I 6 – Mission Impossible – the sixth film in the franchise – is set to land in theaters in July.