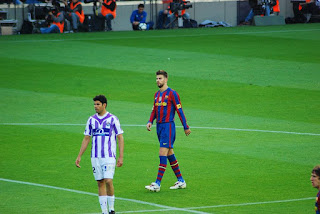 [1:49 AM, 1/27/2018] Naija: Following the Copa del Rey tie between the rival clubs at the Camp Nou, Espanyol have called on the anti-violence committee to investigate Gerard Pique's comments.

There have been additional complaints made about remarks Sergio Busquets made as well as chants heard from the Camp Nou crowd.

Espanyol want these three incidents analysed as they believe they are statements which incite violence, racism, xenophobia and intolerance within the confines of the sport. Their complaint will be transferred to the RFEF and the Competitions Department of LaLiga.

Pique is in hot water after he labelled the club 'Espanyol de Cornella'. "They are from there, right?" he joked.

Espanyol were unhappy with the Spanish defender making such comments and made their feelings clear in a statement.

"We consider that any demonstration in a clearly derogatory tone towards these cities, such as those uttered by Mr Pique towards the city of Cornella, flirt very dangerously with xenophobic attitudes," the statement read.