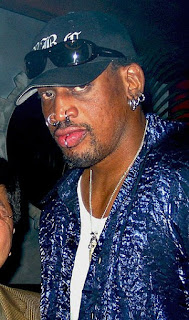 Former NBA star Dennis Rodman has been arrested for DUI.

Rodman was driving in Newport Beach Saturday at around 11 PM when cops pulled him over for a traffic violation. Cops administered a field sobriety test, which he flunked. He was handcuffed, put in a patrol car and taken to the police station.

Rodman was cooperative and submitted to a breathalyzer test, and he blew over the .08 legal limit.

Rodman remained in jail for 7 hours, and when police determined he was sober enough to care for himself he was released.

Rodman's rep shares, "Alcoholism has been a struggle on and off for Dennis the past 15 years," adding he's been going through some "tough personal issues." The rep says he's going to talk to Dennis about going back to rehab.