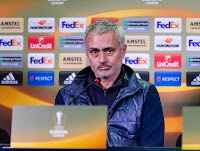 Jose Mourinho believes "people with a brain" should be able to see that Manchester United's recent issues are a result of being in "transition".

Although United have only failed to win four of their last 15 games across all competitions, performances have fallen well short of expectations.

The most striking failure in recent months was the 2-1 defeat at home to Sevilla in the Champions League round of 16 , a defeat which eliminated United from Europe's elite competition.

"And I think really at this moment looking to us in the Premier League we have one team [Manchester City], one club clearly better prepared than us in the past few years to be first and we have 18 clubs behind us. One in front of us, 18 behind us.

"Of course in the future we want to have 19 clubs behind us but this is the reality, and the reality is for people with a brain, with sense, with common sense, with knowledge of what sport is, we are in a moment of transition.