'God's Own Country' Is a queer film like no other 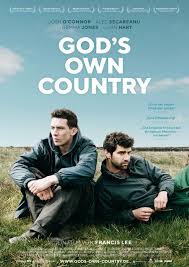 A year after Moonlight took home best picture at the Oscars, groundbreaking films like the Daniela Vega-starring A Fantastic Woman and Luca Guadagnino's Call Me by Your Name both won major awards.

Few American viewers have heard of God's Own Country, but the film, which received a BAFTA nomination for British film of the year and currently has an impressive 99% Rotten Tomatoes score, has been making waves abroad. It is now available in the U.S. for VOD streaming. Tracking the relationship between a Yorkshire farm worker named Johnny who drowns his sorrows in alcohol and a Romanian migrant, Gheorghe, who comes to work on the farm, God's Own Country skewers everything from masculinity to anti-immigrant ideology. It also has something that few queer films do — a happy ending.

Queer cinema has a storied history of tragic outcomes, a trope so common that it is difficult to watch a Call Me By Your Name or a God’s Own Country without at least partly anticipating a character death.

As it turns out, the ending is what audiences have responded to most, catapulting a low-budget, indie film from an unknown director into theaters across the world. According to Lee, it’s one of the biggest commercial and critical successes of a debut U.K. filmmaker in years, and along with movies like Call Me By Your Name, Moonlight, Carol and A Fantastic Woman, it is proving that queer films aren't niche films. “I think finally there's some sense among the people with the money and the power that these stories do transcend, [that] lots of people do want to see them," Lee said.

Lee, who notes "I’m no cinephile," didn’t write a hopeful ending between Johnny and Georghe to be deliberately subversive. “I didn't realize that there is a trope of queer cinema to not have a happy ending," he said. From his first draft of the script, he knew only that they deserved a hopeful finale. "It was only when people started to talk about it as bucking the trend, and how queer cinema generally has quite tragic endings, sad endings, unrequited love affairs, did I realize that this is slightly different."