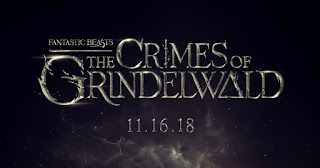 The first trailer for Fantastic Beasts: The Crimes Of Grindelwald gives Harry Potter fans their first look at the continuing adventures of Newt Scamander, decades before the Boy Who Lived was even thought of.

Faves from the first film - Newt, Tina, Queen, and even Jacob - have all returned, as well as Johnny Depp, who shocked fans in the final moments of the last film as he was revealed to be Grindelwald himself!

But the big reason to tune in for the first tailer is to see Jude Law's debut as a much younger, more tortured Albus Dumbledore than you've ever seen before.

We also see he'll finally come face to face with Leta Lestange, played by Zoe Kravitz, an old flame who seems to have taken up with his more revered brother.

We know that Ezra Miller is also back as Credence, though how he pulled that off after his violent confrontation at the end of FB1, we'll have to wait and see.