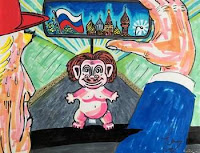 Jim Carrey, 56, is at it again! Just two days after he debuted his painting of President Donald Trump, 71, dressed as a witch, he’s back with another unflattering piece of work. This time, the Bruce Almighty actor shared a piece depicting Trump’s attorney Joe diGenova as a troll doll hanging from the rear-view mirror of a car driven by POTUS. “Lawyer and lucky charm Joe diGenovia hopes to put Dirty Donald’s troubles in the rearview mirror. But the objects in the mirror are closer than they appear,” he tweeted with the pic. And by objects in the mirror, Jim is clearly referring to The St. Basil’s Cathedral in Moscow and the Russian Federation’s flag reflected in the painting. Pretty shady, right?