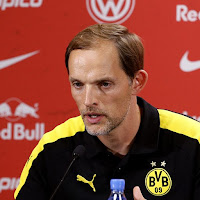 Reports in Germany have claimed former Borussia Dortmund boss Tuchel has rejected an offer from Bayern to succeed Jupp Heynckes at the end of the season.

It is claimed the 44-year-old expects to become the new Arsenal manager, although Paris Saint-Germain are also said to be interested in him as a replacement for Unai Emery.

Germany and Bayern great Matthaus thinks Tuchel would be the right choice for Bayern but claims he has already been "in touch" with the Gunners.

"You know, I'm a journalist too, we have to make headlines every day," he told Omnisport following a match between Liverpool and Bayern legends at Anfield on Saturday.

"I think Thomas Tuchel can be the favourite, [the] ex-coach from Borussia Dortmund, but I know he's in touch with Arsenal and nobody knows what happens behind the doors."