Mkhitaryan: It's a pleasure to play alongside Ozil 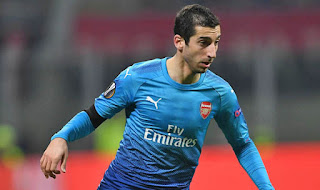 Henrikh Mkhitaryan has revealed that he loves to play alongside Arsenal team-mate Mesut Ozil and believes that the two can continue to combine to great effect for the Gunners.

The Gunners duo were instrumental in the north Londoners 2-0 win against AC Milan at San Siro on Thursday, with Ozil recording two stunning assists to guide an improved Arsenal to a first leg victory.

Mkhitaryan provided three assists on his debut against Everton but has struggled to influence an under performing Arsenal side in recent week before netting the opening goal in Milan as Arsenal silenced the 70,000 home fans.

"Yes, everyone is asking about that [playing in the same team as Ozil], but why not?" Mkhitaryan told Vivaro News.

"This is not the first time that two No.10s play together. It's just a pleasure to play alongside such a player like Mesut Ozil, because everyone knows that he is a world class player.

"If I'm not mistaken, he provided two assists for the first and second goals. Why not? He can assist me and I can assist him as well."