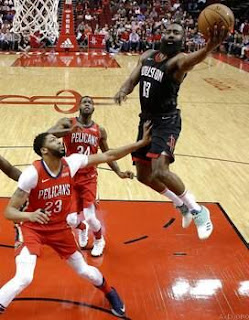 James Harden is certain the Houston Rockets won’t let up in their last nine regular-season games despite holding a 4 1/2 game lead over Golden State for the top seed in the Western Conference.

“The edge is going to be there no matter what,” he said. “We haven’t done anything. We don’t have time to relax.”

Harden scored 27 points in three quarters and the Rockets routed the New Orleans Pelicans 114-91 on Saturday night for their eighth straight victory.

The NBA-leading Rockets improved to 59-14 to overtake the 1993-94 championship team for the most wins in franchise history.

“It was just another win,” Eric Gordon said. “We have high expectations for one another.”

Houston never trailed and already had a huge lead to start the fourth before scoring seven straight points early in the period to make it 92-63 with 10 minutes remaining. Clint Capela had four points and a steal to lead Houston in that stretch. Capela finished with 18 points, 16 rebounds, three steals and tied a career high with six blocks.