‘Game of Thrones’: Is Ned Stark being resurrected for the final season 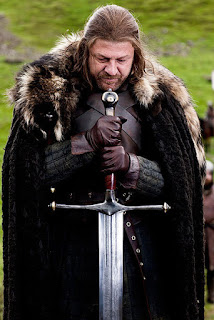 Sean Bean’s character Ned Stark was killed off in the first season of “Game of Thrones.” The beheading of the Stark family patriarch, who doubled as the show’s moral compass, was the first big twist for the HBO fantasy series.

Six seasons later, Ned’s presence is still missed. With the eighth and final season set for 2019, rumors have been flying that Ned will be resurrected.

Remember the Hound? And Viserion the dragon? And of course there was Jon Snow, brought back to life through some Red Lady voodoo.

But Ned literally lost his head. Is there such a thing as re-capitation in the wild and whack-y world of Westeros?

Bean, while promoting his new series “The Oath” on the Crackle streaming network, addressed the comeback rumors and cleared up other “GoT” business, in an interview with the Huffington Post.

On Ned’s return, Bean said HBO has not been in contact with him.

“No, they’ve never said that,” Bean said. “And yeah, I’ve heard rumors, but not from very good sources that I might be back. But I think I’ve done my time there, and I created a good character. It’d be rather strange to see him resurrected.”

So that would be a no.