Curry🤕 Injury Update: Warriors Star🌟 Won't Be Out💪 for Long 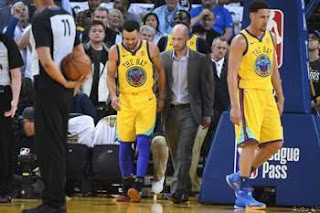 Golden State Warriors star Stephen Curry is not expected to miss too many games after suffering an ankle injury on Thursday (Friday AEDT). Curry twisted his right ankle early in the first quarter during Golden State's 110-107 home victory over the San Antonio Spurs.

According to ESPN's Chris Haynes, Curry is "day-to-day" and will travel with the team during the two-game road trip to the Portland Trail Blazers (Friday) and Minnesota Timberwolves (Sunday). The report added that Curry re-injured the same ankle he tweaked in Atlanta nearly a week back. Curry didn't miss any action from the previous injury due to the three-day gap before the game against the Brooklyn Nets on Tuesday.

Haynes added in the report that the Warriors medical staff was not worried about the extent of Curry's injury after evaluating the two-time MVP in the locker room. "After a thorough evaluation in the locker room, the Warriors decided not to let Curry return to action. Curry had his ankle re-taped and performed functionality tests, but the organisation decided to exercise caution."