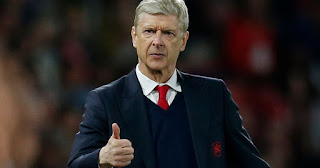 The Gunners halted a four-game losing streak with an impressive 2-0 Europa League last-16 win at AC Milan on Thursday, but that result might do little to improve an atmosphere verging on toxic around the Emirates Stadium.

Back-to-back 3-0 defeats against Manchester City – the first of which came in the EFL Cup final – and a sapping reverse at Brighton and Hove Albion arguably left Wenger's tenure at its lowest ebb.

"Every manager will tell you when he doesn't get results that the first thing affected is the mood, the lack of sleep [because of] that desire to find solutions," he said.

"Overall, it is part of the job. When you are a young manager you dream that you want to win every football game. But it is not about that. It is about surviving through disappointments and finding solutions. That is interesting as well and can make you a better manager.

"I got many messages from people who are supportive and I must stay I am very grateful for that.

"Current and past [managers have been in touch]. I have a good relationship with Ferguson at the moment, sometimes he sends me a message, yes, when things don't go well.

"We all know we are on the same boat. I can understand every manager has his own problems and has to face his own daily situation."