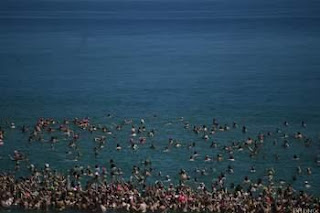 The world’s largest skinny dip took place on Saturday morning, with more than 2,500 women stripping off on a secluded beach in the Republic of Ireland to break the Guinness world record. The annual event, known as Strip and Dip, is in its sixth year after being launched by breast cancer survivor Deirdre Featherstone and this year was raising funds for Aoibheann’s Pink Tie, Ireland's national children's cancer charity.

Open to women only, participants were made up of cancer patients, survivors and those who had been otherwise affected by cancer. Ms Featherstone decided to launch the event just six weeks after undergoing a mastectomy. 60 people attended the inaugural swim while numbers grew to 200 for last year's event.

“I had a brainwave to do something fun,” the 53-year-old mother-of-three wrote on this year's registration page. “There are a lot of women undertaking this who have been through cancer and of course loads of people who have been affected by it. With our laughter, scars, dodgy boobs - or in a lot of cases only one or none, we would like to send a message that there is life after cancer and also raise awareness of how important it is for ladies to get checked. It’s a magical day for all involved.”