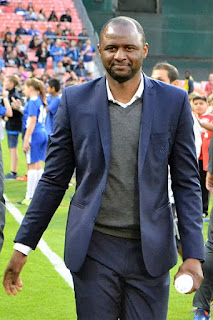 Patrick Vieira's departure from New York City to take over as head coach of Nice has been confirmed by the Ligue 1 club.

Former France international Vieira, who was a key part of Arsenal's 'Invincibles' side of 2003-04, takes over from Lucien Favre, who left for Borussia Dortmund in May, but Nice have not disclosed the length of his contract.

Manchester City – part of the City Football Group that owns the New York club – announced the switch on Sunday, but it was not until Monday that the two clubs involved confirmed an agreement.

Vieira says he is excited about the challenge offered to him on the Cote d'Azur.

"I was seduced by the project and by the people involved in it," he said. "I have talked a lot with [director general] Julien Fournier and the president [Jean-Pierre Rivere]. When I look at the squad, it makes me very envious. There is everything you need here to succeed."

"My playing career no longer counts for anything, it's part of the past. The important thing for me is to have a clear idea of what I want from the players, a precise game plan so that they can express themselves because the talent is there."