Victor Oladipo having a stellar season in the NBA.


The magic took victor oladipo’s with no 2 overall pick in 2013. 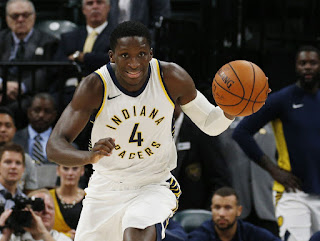 Well, has that look again.... five years, two teams and plenty of trials and tribulations later, he’s finally back to his plan, He’s doing it on familiar ground, too back in Indiana with the pacers and in the middle of the surprising rebuild the franchise kicked into high gear over the summer, when they traded ALL-star and face of the franchise paul George to Oklahoma city for Oladipo and Domantas Sabonis.
It was a deal that signalled yet another shift in Oladipo’s career. After three decent seasons in Orlando, he was traded to the thunder where he took up residence as Rusesell Westbrook’s No 2 – only to have that experiment never really take off the way everyone really expected
But thats all history now for Oladipo, whose NBA existence came full circle this season with him earning his second eastern conference player of the week this season. 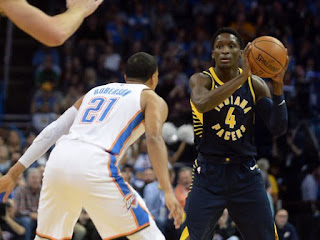 Oladipo did have a career-high of 47-point win over Denver, which came after days he smoked LeBron James and Cleveland for 33 points, eight rebounds and five assists to help the Pacers end the cavalier’s win streak at 11 games.


Oladipo’s story should be a learning experience, too, a lesson for anyone who refuses to believe in the power of patience. He’s living proof that it’s never too late to find the right fit, to chase the elite destiny you believe was in you. 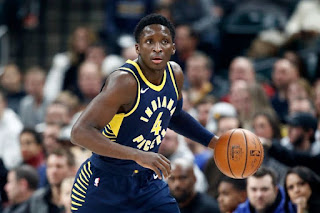 People wrote him off when he struggled to find his rhythm playing alongside Westbrook. Even more did when the Thunder traded him to the pacers.


Clearly, he never stopped believing.
He’s posting career-bests across the board – points (24.3), rebounds (5.3), assists (4.1), steals (1.9), blocks (1.0), field goal percentage (4.78) and 3-point average (4.26)- and should be included in any conversation about the Kia most Improved player award.
“Victor Oladipo is the face of Indiana Vic is the future,” George said after the game, trying to put his seven years with the pacers in the proper context and allow everyone to move on to the Oladipo era. “He’s going to be great here. He’s blessed. He’s talented what you want in a guy for a franchise.