- December 26, 2017
Second-half goals from Alvaro Morata and Marcos Alonso gave Chelsea and 2-0 win over Brighton and Hove Albion and moved the reigning Premier League champions to within a point of second-placed Manchester United after Manchester united was held at Old-Trafford by Burnley. 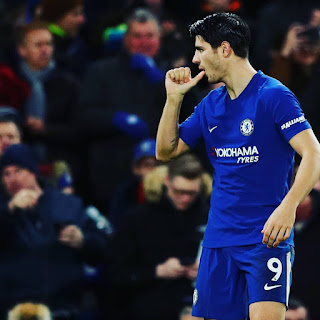 Antonio Conte's men drew a frustrating blank in a goalless draw at Everton last time out and endured more frustration as Brighton defended impeccably during an uneventful opening 45 minutes at Stamford Bridge on Boxing Day.

It took a familiar combination to break the game open as Morata headed home from Cesar Azpilicueta's pinpoint cross 51 seconds after the restart – the sixth time the full-back has set up his Spain colleague in the Premier League this season.

Morata is now on to 10 for the campaign in the top flight and another of his compatriots, Marcos Alonso, made the points safe with his fifth as the hour arrived.

Chelsea have now won nine of their last 12 Premier League games and are on 42 points - just one behind United, who savaged a 2-2 draw at home to Burnley, with runaway leaders Manchester City 13 points better off with a game in hand against Newcastle United on Wednesday.