- December 26, 2017
Manchester United's lingering Premier League title hopes were dealt another blow despite them coming from 2-0 down to draw 2-2 with Burnley on Tuesday.

Jose Mourinho's side were facing a defeat at Old Trafford for only the second time this year thanks to first-half goals from Ashley Barnes and Steven Defour, before Jesse Lingard came off the bench to earn his side a point. 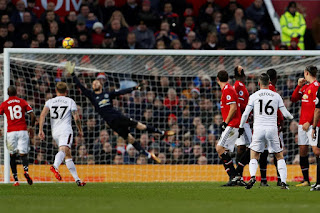 It means United have still only lost to Manchester City at home in 2017, but they will be 15 points behind the runaway Premier League leaders if Pep Guardiola's side beat Newcastle United on Wednesday.

The Red Devils endured a tough week before Christmas as they exited the EFL Cup to Bristol City before conceding a last-minute equaliser in a 2-2 league draw with Leicester City, and they found themselves behind after only three minutes when Barnes capitalised on their failure to defend a free-kick. United pushed for an equaliser, but were dealt a sucker punch when Defour, once linked with a move to the club, struck a superb free-kick before the interval.

Lingard came off the bench to flick home and give his side a lifeline, and Burnley were denied a first away league win over United since September 1962 when the England international fired home in second-half injury time.